The Roebling's history in Trenton dates to 1848, when John A. Roebling purchased 25 acres of land in Chambersburg (then an independent borough just SE of Trenton). At its peak, the complex expanded to dozens of buildings and employed over 15,000 people.

Best known today as the "father of the Brooklyn Bridge", Roebling (and the company he founded) supplied cables from Trenton to most of the major suspension bridges built in United States during the first half of the 20th century. Among the dozens of major bridges using Trenton-made cable are New York City's Williamsburg, Manhattan, and George Washington Bridges, as well as the Golden Gate Bridge in San Francisco.

Roebling Lofts converted the "Clark Street Rope Shop" (Building 101), erected in 1917 during WW I. It was an ultra-modern facility for its time, with massive windows and a fire resistant design. It replaced an older factory that burned down in late 1915, allegedly by German saboteurs. Building 101 specialized in light- and medium-gauge wire rope such as used in aircraft. 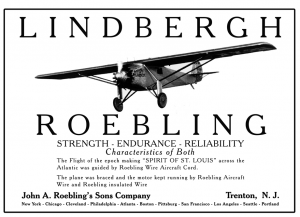 Perhaps the factory's most famous customer was Charles Lindbergh, who specified Roebling wire for The Spirit of St. Louis, the plane he flew non-stop from New York to Paris in 1927. This has been called the single most influential flight in aviation history, excepting the 1903 first-flight by the Wright Brothers, who also used Roebling cables for bracing wings. Lindbergh used Roebling products for control cables, to brace the wings, for the ignition harness, and the plane's lightning rod. The testing lab for the aircraft business was located on the 4th floor of the Clark Street factory, including a massive machine designed to simulate stresses on wings. The machine survives in place on the 4th floor, and is being preserved in a lounge for use by residents of Roebling Lofts. 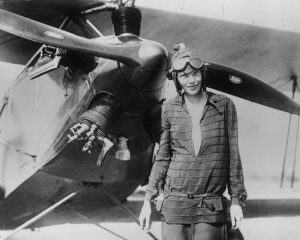 By the 1930s, Roebling had established relationships with virtually every major US aircraft manufacturer who valued their products for their high strength-to-weight ratio and consistent quality. Lockheed Aircraft was a key customer, which means that the airplane Amelia Earhart was flying when she disappeared in 1937 on her round-the-world flight, would have been built using control cables manufactured and tested in Building 101.